Little League’s roots extend as far as baseball’s history itself – even into the 18th century.

Soldiers of the Continental Army played ball at Valley Forge during the American Revolution. U.S. citizens played more modern versions of the British games of cricket and rounders through the early 19th century, often called "town ball." In the 1840s, New Yorker Alexander Joy Cartwright and his acquaintances played a game they called "base ball" that was very similar to the game we know today. (Stories later arose saying Abner Doubleday invented the game, but historians generally regard the stories as myths.)

On June 19, 1846, in a contest many historians consider the first scheduled baseball game, Cartwright’s New York Knickerbocker Baseball Club was defeated by the New York Baseball Club, 23-1, in four innings.

During the American Civil War, soldiers on both sides played baseball to pass the time between battles. In 1869, the Cincinnati Red Stockings became the first openly professional baseball team. By the end of the 19th century, baseball was known as "America’s Pastime."

As early as the 1880s, leagues were formed for pre-teen children in New York, but they were affiliated with adult "club" teams and did not flourish. Children often played "pickup" baseball in streets or sandlots instead, and with substandard equipment. Cast-off bats and balls were taped and re-taped, and catcher’s equipment in children’s sizes was almost nonexistent.

In the 1920s, the American Legion formed a baseball program for teen-age boys that exists today. American schools also started baseball programs. But there was still a void for pre-teen boys who wanted to play in organized games. Other smaller programs cropped up from time to time, but did not catch on beyond local areas.

In 1938, a man named Carl Stotz hit upon the idea for an organized baseball league for the boys in his hometown of Williamsport, Pennsylvania. Carl had no sons of his own, but he often played ball with his young nephews, Jimmy and Major Gehron, and wanted a way to provide an organized program for them.

Carl gathered several of the neighborhood children and experimented with different types of equipment and different field dimensions during that summer. The program still did not have a name, and no games were played.

In 1939, Carl and his wife Grayce took the experiment a step further, enlisting the help of brothers George and Bert Bebble and their wives, Annabelle and Eloise, respectively. Carl, George and Bert were the managers of the first three teams: Lycoming Dairy, Lundy Lumber and Jumbo Pretzel. John and Peggy Lindemuth soon joined the group, with the eight volunteers making up the very first Little League board of directors.

Carl also talked to his friends in the community and came up with the name: Little League. His idea was to provide a wholesome program of baseball for the boys of Williamsport, as a way to teach them the ideals of sportsmanship, fair play and teamwork.

The sponsorships (the fee was $30) helped to pay for equipment and uniforms for 30 players. Since then, sponsorship of Little League both at the local league level and at the Headquarters level have helped to keep costs to parents to a minimum.

In the following years, other programs emulating the first Little League sprung up. Boundaries for each league were established to ensure each league could thrive without worrying about neighboring programs "raiding" its players.

From those humble beginnings, Little League Baseball has become the world’s largest organized youth sports program. In the space of just six decades, Little League grew from three teams to nearly 200,000 teams, in all 50 U.S. states and more than 80 countries.

And the basic goal remains the same as it did in 1939, to give the children of the world a game that provides fundamental principles (sportsmanship, fair play and teamwork) they can use late in life to become good citizens. 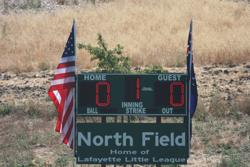 Buckeye Field is a magical place.  Its manicured playing surface, perfect conditions, and picturesque setting are the envy of surrounding communities.  Yet, none of these attributes are what make it special.  It is special because it is the place where our community gathers to teach our children and enjoy each other’s company.  It is where we show them how to compete with integrity, to transform disappointment into resiliency, to display courage and determination in the face of adversity, and that teamwork is essential for genuine achievement.

With this perspective, it is clear that the magic of Buckeye and of Lafayette Little League is not only found in the place where it happens, but also in the volunteers who devote themselves to these lessons.  The league’s twenty-five board members work tirelessly to organize every aspect of the league.  More than 50 managers and 100 coaches guide our players on a daily basis in practices and in games.  In fact, every one of our 700+ families performs important volunteer jobs that help our league function efficiently – we are run 100% by volunteers.  Umpires teach respect while overseeing games, and the generous support of our sponsors makes financing the endeavor possible.  Everyone contributes and should take pride in what the league represents.  Together, we have built this community’s best venue for providing our children with the foundation of character and values that they will need to succeed as young adults.

Finally, Lafayette Little League is special because it is a community.  More important than the game we teach is the fact that we do it together.  We forged new friendships during a visit to the snack shack, we root side by side in the stands, and we cheer as someone sends a ball sailing over the fence.  Most of all, Lafayette Little League is a forum where parents spend time with their children, creating enduring memories.  Our sincere hope is that all families will cherish the special memories created during the baseball season and that someday the players of today will bring their own children back to Buckeye to play catch on the same dirt and grass where we play today.